A documentary about Marvel Comics legend Stan Lee will premiere on Disney+ in 2023, Marvel announced on what would have been the comic book writer’s 100th birthday.

The teaser features late comic creator’s minor roles and cameos throughout his life in the eyes of his iconic sunglasses. 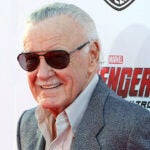 Lee, who passed away in 2018 at age 95, is credited with co-creating much of Marvel Comics’ vast library of characters and concepts. On the 100 year mark since Lee’s birth, creators and fans alike have paid tribute to Lee and his sprawling contributions to the Marvel Universe.

“100 years ago, Stan was born in NYC. Over the last century, his work changed the pop culture landscape & influenced millions,” said the official Stan Lee Twitter account now run by POW! alongside a video of messages left for Lee’s centennial at LA Comic Con. “Inspiration. Legend. Hero. These are some of the words that came up again & again. #StanLee100“

Marvel and Disney didn’t reveal what the documentary would cover, but presumably it won’t chart the same territory as the 2021 biography “True Believer: The Rise and Fall of Stan Lee” by Abraham Riesman. That book exampled Lee’s complicated life, including the accusations that dogged him throughout his life of stealing the credit for work created by other Marvel figures, as well as the menagerie of what the book describes as “grifters” who surrounded him in his final years.