The Gothams also handed out awards in four television categories. “Mo” won the award for breakthrough series under 40 minutes, while “Pachinko” won in the over-40-minutes category. Ben Whishaw won the Outstanding Performance in a New Series award for “This Is Going to Hurt.” “We Need to Talk About Cosby won the award in the Breakthrough Nonfiction Series category.

Gotham Awards eligibility is restricted to films of more than 70 minutes that were made for less than $35 million. Films must be directed and/or produced and/or written by U.S. citizens or filmmakers permanently based in the United States. Films must also qualify as “filmmaking with a point of view,” which the Gothams define as a work “where the vision of an individual director, producer, writer or writer/director is abundantly evident, and where the film cannot be classically defined as a ‘work for hire.’”

(The show’s special tribute categories are not bound by those rules.)

In the 18 years the Gotham Awards have given out a Best Feature award, the Gotham winner has won the Oscar only five times, most recently with “Nomadland” in 2020.

The Gotham winners were chosen by a number of different juries of “distinguished filmmakers,” according to the Gotham Film & Media Institute. The organization added that the jury is “frequently comprised of directors, writers, producers, editors, actors, directors of photography and others directly associated with making films and television.” 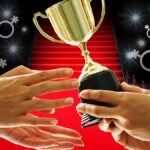 Breakthrough Performer:
Anna Cobb in “We’re All Going to the World’s Fair”
Frankie Corio in “Aftersun”
Anna Diop in “Nanny”
Gracija Filipovic in “Murina” *WINNER
Kalie Reis in “Catch the Fair One”