Piper may not always have much to say in “Darby and the Dead,” but when she does speak, she makes her one-liners count. And, as it turns out, one of those quips was going to be a super meta reference to Auli’I Cravalho, thanks to Nicole Maines.

In the film, now streaming on Hulu, Piper (Maines) is one of the friends/minions of Capri Donahue (Cravalho). When Capri unexpectedly dies at school one day, her fellow Brandz — which, Maines told TheWrap, is what the group of girls dubbed themselves off camera — go into mourning. But none of them mourn more dramatically than Piper. Donning a black veil and all, Piper is in tears remembering her friend for the local news, and reveals a secret: though Capri’s full name was Capricorn, she was actually a scorpio.

But Maines did try to remember the character a little differently. According to the actress, there was one take where she very unsubtly nodded at Auli’i Cravalho’s most famous character. 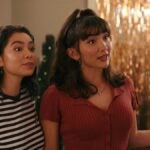 “I did a line where — it didn’t make it into the movie and I understand why — but I did a couple takes where I said, through tears, ‘She had a voice like Moana!’” Maines revealed with a laugh. “I wish it made it into the movie, because it’s so stupid and self referential! But it was so much fun.”

Cravalho, of course, voiced the character of Moana for Disney back in 2016, and returned for a small cameo in 2018’s “Ralph Breaks the Internet: Wreck-It Ralph 2.” There is a “Moana” series in the works for Disney+ in 2024, but it remains unclear if Cravalho will return for the series.

And though it may be jarring to see Cravalho on screen as the “dead bitch in charge,” as Maines put it, she’d add that Cravalho is still “fully” Moana in real life. “She is genuinely one of my favorite people now, I love her so much,” Maines said.

“Darby and the Dead” is now streaming on Hulu.