Kenny Leon began his 2014 Broadway revival of “A Raisin in the Sun” with a recorded interview featuring the voice of the late playwright Lorraine Hansberry. The director begins his current revival of “Ohio State Murders” with a recorded interview featuring the voice of Adrienne Kennedy, now 91 years old. The effect in both productions blurs the line between autobiography and fiction, and here with the Kennedy play, which opened Thursday at Broadway’s newly renamed James Earl Jones Theatre, it is also reflected in the deeply empathetic performance of Audra McDonald.

Hers is clearly a performance that goes beyond the written words in the script. McDonald’s performance also has that veracity that comes from basing her character on a living person, in this case, Kennedy herself. The actor replicates the playwright’s halting, carefully modulated delivery. It’s as if McDonald is rewriting every line a few times before she actually says it out loud. “Ohio State Murders” features four other actors, but as powerfully staged here by Leon, it is a one-person show starring McDonald. 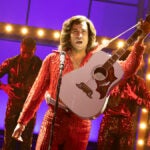 It is a most elliptical play. One of Alexander’s twin infant girls has been murdered before we are told the identity of the babies’ father (Bryce Pinkham). We meet Alexander’s boyfriend and future husband before we meet her first boyfriend (the double-cast Mister Fitzgerald). Kennedy’s writing keeps an audience on its toes. More importantly, it replicates in gorgeous style the way in which memories keep the past very much in the present, although not always in chronological order.

“Ohio Start Murders” is very much a memory play, a story of racism and infanticide told to us by McDonald. The actors Lizan Mitchell and Abigail Stephenson, like Pinkham and Fitzgerald, make brief appearances – in their case, as a college roommate and a kindly aunt, among other characters, but they emerge very much as figments of Alexander’s imagination, or recollection. They don’t so much interact with the Alexander character as they are remembered by her. Even Alexander’s contact with her children’s father is reduced to a few spoken encounters. Pinkham effectively charts the professor character’s emotional breakdown through a series of readings from the works of Thomas Hardy, delivered at a classroom lectern. Pinkham makes the most of not very much.

In the beginning, McDonald’s halting delivery comes across as an actor’s tic, a mannerism carried to the extreme. By the play’s end, that overly studied reserve may be the only thing that keeps this character from absolutely exploding with rage. 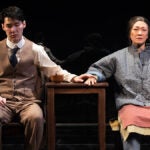